Application performance is one of the key contributors to end-user experience. Learn the hidden impacts of performance issues and improvement options

There’s little debate that application performance is one of the key contributors to end-user experience. If your application is slow, customers will not buy it (or will leave). For websites, even milliseconds matter. For example, Trainline reduced latency on their website by 0.3 seconds, leading to customers spending an extra NZ $15 million a year through their site. Staples saw a 10% increase in their conversion rate by improving the load time of their website by 1 second. The BBC calculated they lose an extra 10% of users for each extra second their site takes to load.

A slow running application is a clear indication that there are issues in the codebase, the architecture, or the infrastructure. However, an application does not need to be running slowly for there to be underlying performance issues. The following are some of the hidden impacts of performance issues:

There are a number of steps to take once performance issues are identified. The first few steps include benchmarking your application and running controlled tests to understand where performance bottlenecks are. Identifying bottlenecks is an entire discipline in its own right, and is beyond the scope of this article. There are also countless ways to optimise a codebase to make it more performant, which is also beyond the scope of what we can look at here. Instead, the following focusses on some commonly used approaches to architect for performance.

If you’ve identified that your web frontend is struggling under load, a simple thing to consider is whether you could reduce the number of requests it needs to serve.A CDN is typically used to create copies of static content and store it in multiple locations around the world. Then, when users access your static content, it is served directly from the CDN which may be much closer to them, and the request is never made to your web application.

Moving static assets to a CDN reduces the number of calls a web application needs to serve. It also introduced the following benefits:

Consider, for example, a web application that needs to process an import file. It could:

With the web-queue-worker pattern though, the alternative flow might be:

The end user would see (perhaps) a “processing” page, whilst in the background:

Depending on the approach on the web application, the user may then see some form of “completion” message.

Implementing the web-queue-worker pattern can bring the following benefits:

When the backend data store is identified as a potential bottleneck, there are patterns to reduce the number of calls it needs to service. One of these patterns is the cache-aside pattern. Using this pattern, an application first checks the cache for the data it needs. If the data is not there, the data store is then queried, with the result then being added to the cache. This means that subsequent requests can be served directly from the cache, rather than the data store. This pattern is very effective for static or infrequently changing data. 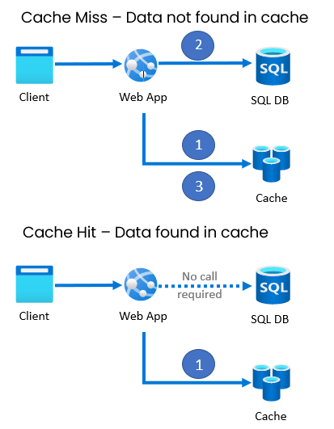 Implementing the cache-aside pattern can bring the following benefits:

Make use of read replicas 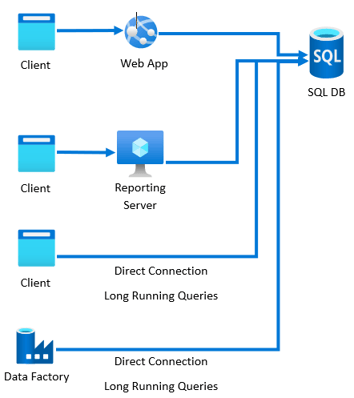 By making use of read replica, the following benefits might be seen:

Whilst it may initially seem counter-intuitive, adding additional resources to your cloud solution can reduce costs whilst improving performance. The rule of thumb is: performance if a resource has a lot of work to do, find a way for a different resource to do some of the work. The combined cost of running the two resources (potentially on lower service tiers) can be less than the cost of continuously scaling up a single resource.

When architecting your solutions to be performant, you can:

If you want to understand how you can achieve these results for your business, get in touch with our team today.